So exclaims Stereonet UK’s David Price in a detailed exploration of the Falcon LS3/5a: the most authentic re-production in history. In a headline review he says “ It’s the combination of tonal smoothness and delicacy of touch that makes the Falcon Acoustics LS3/5a so special. There’s no particular ‘sweet spot’ in this speaker, just a linear progression of sound that stretches high to low. Despite its tiny bass driver, the song’s powerful piano cadences are full of body and have a rich, sonorous texture. Indeed this speaker goes lower better than you’d imagine…Thanks to its excellent and accurate stereo imaging, the Falcon Acoustics LS3/5a can easily fill medium-sized rooms with sound. For example, the classic rock of Crosby, Stills, Nash’s Wooden Ships was rendered with a superlative sense of perspective. This speaker doesn’t push the recorded acoustic out at you, but rather invites you to peer deep inside. Although things were a little smaller in scale compared to my larger reference speakers, everything was kept in perfect proportion. Again, human voices were handled majestically – both lead and backing vocals hovered in space above the band, completely separate. But it’s only when you give this loudspeaker a full orchestra to reproduce that you really hear its spatial genius; the Berlin Philharmonic playing Beethoven’s Pastoral Symphony was a tactile delight, with the string section so clearly resolved that it could have been nailed to my listening room wall.” 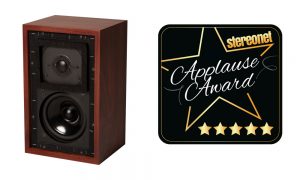